Our client is the largest pharmacy health care provider in the United States. In addition to providing customary pharmaceutical services, the company also has a robust retail store element. Our client is uniquely positioned to provide better health, including filling 718 million prescriptions in 2012, and attending 18 million ‘MinuteClinic’ patient visits to date. In 2011, the client announced that they exceeded $100 billion in revenues.

Our pharmacy company client was experiencing challenges in finding new ways to effectively communicate relevant information to their in-store retail customers based on their precise department/aisle location. In-store 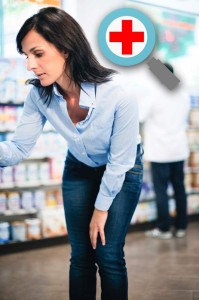 posters, coupons and signage lacked personal interaction and individual tailoring that their customer base was craving.

Looking to leverage mobile technology to better serve their customer’s health needs, this pharmacy giant determined that they needed to leverage Apple’s innovative iBeacon capabilities. This newly released mobile messaging technology is ideally suited to transform how retailers communicate and interact with their customers. Thus, our client contracted the Mobile Apps Company to build a proof of concept to pioneer the functionalities to fit their specific retailing needs.

Using Bluetooth technology, each pharmacy retail store strategically places low-level transmitters throughout their departments and aisles. These are intended to send messages directly to a mobile device within a small, specifically defined area. Our Mobile Apps Company consultants are currently using Motorola’s prototype transmitters to facilitate this functionality.

In order for iBeacon to work as intended, customers must first install the retailer’s app. Then, based on the user’s exact location, the transmitter sends a signal to the store’s server, which then selects an advertisement to push to the user’s mobile device.

By way of example, if a customer was to walk near the aisle for cough and flu remedies, then that customer would be able to receive discounts on relevant items. These discounts would then be delivered instantly via e-coupons which would appear on the customer’s mobile device.

Apple’s iOS 7 has all the necessary capabilities to use iBeacon as it’s already built into the operating system. Additionally, any Android phone with Bluetooth and Android 4.3 or above can download an Android version of the app. Doing so would allow Android equipped customers to receive the same signals. By being able to reach both Apple and Android mobile users, this Mobile Apps Company client will be able to connect with the vast majority of mobile device users.

Until recently, the use of iBeacon was an “opt-in” feature on the part of the iPhone user. With the release of iOS 7.1 iBeacon is now an “opt-out” feature which means that in most cases, the ibeacon functionality is available to this client.

Users will still need to actively install the client’s mobile app in order for each store to access iBeacon and push messaging. However, the customer doesn’t need to have the application opened or running for iBeacon to interact with their mobile devices. As this client’s app already allows for coupons and discounts to be offered to the customer based on prior buying choices, the expectation is that this app will be readily embraced by those who tend to shop at our client’s locations.

Because this is a new technology, there have been some interesting difficulties our developers must overcome. A significant issue was to limit the range of the iBeacon within precise layouts to avoid signals overreaching or conflicting with signals emanating from different departments or aisles of the store.

While this remains to be an initial proof of concept model, all signs of this project are pointing to success with a nationwide rollout expected in November 2014. Anticipated release will consist of a slow roll out of about a 5% user base. Once all bugs are reported and resolved, the expectation is that the full rollout will commence in short order. Our Mobile Apps Company consultants are currently working on the iOS application and once approved, this will be transposed to the Android platform.